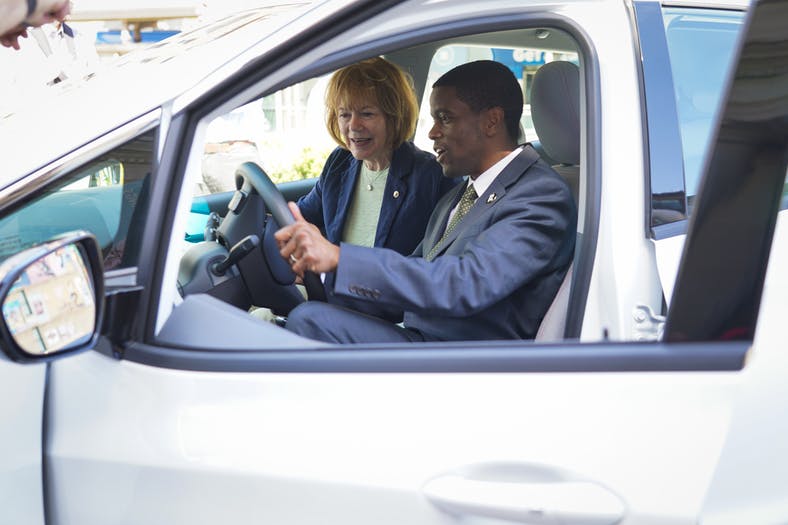 Since the February debut of the Twin Cities’ Evie Carshare, users have logged more than 9,000 trips and 75,000 miles on the fleet of white-and-green Chevy Bolts scattered throughout Minneapolis and St. Paul.

That exceeds the early expectations of Paul Schroeder, CEO of HOURCAR, the nonprofit operator of the electric vehicle-sharing program that officials say is the first in the country to be powered entirely by renewable energy.

“We are well ahead of where we thought we might be,” Schroeder said. “The uptake of the program has been faster than expected.”

St. Paul Mayor Melvin Carter, Minneapolis Mayor Jacob Frey and U.S. Sen. Tina Smith on Friday cruised up to St. Paul’s Union Depot in a pair of Evie cars to laud the program’s recent launch. HOURCAR currently has 101 Evie cars available for use and expects to add 70 Nissan Leaf Plusses to its fleet down the road.

Through a partnership with Xcel Energy, they’re also building a network of 70 EV charging spots throughout the Twin Cities. Twenty-seven of those locations, which also include chargers for privately owned electric vehicles, are already up and running.

“We’re going to make sure that residents who don’t own their own cars have the ability to access transportation in an ongoing and sustainable way,” Frey said.

Users can sign up for the service online at eviecarshare.com, using the Evie app or by calling HOURCAR at 612-343-2277. Schroeder said Friday the program had roughly 3,000 subscribers. Once registered, drivers can use those same resources to search for nearby available Evie cars.

Read the full article at StarTribune.com.