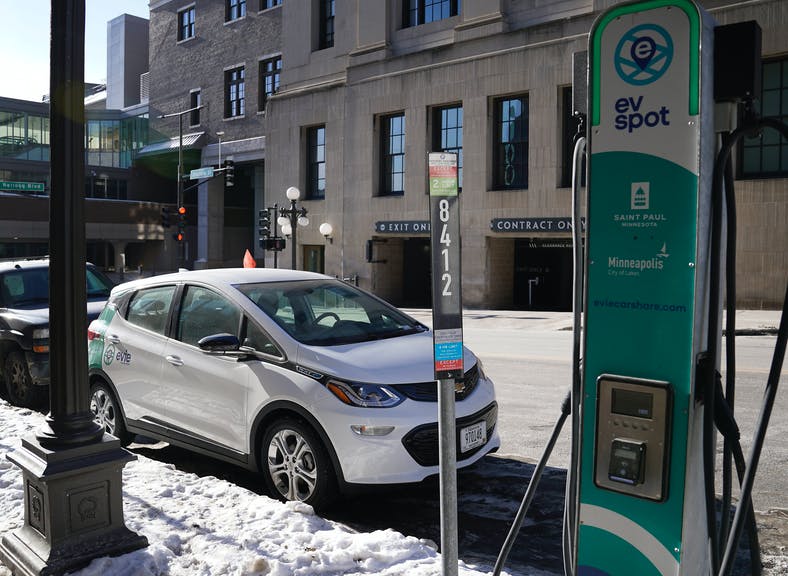 One hundred matching electric vehicles are rolling into the Twin Cities as part of a new car-sharing program that officials say is the first in the country powered entirely by renewable energy.

The white-and-green Chevy Bolts have been leased by the city of St. Paul, which teamed up with the city of Minneapolis, nonprofit HOURCAR and Xcel Energy to launch the $12 million project that will also install 70 new electric vehicle charging stations across the Twin Cities.

Unlike the handful of electric car-sharing programs in other cities that require drivers to dock vehicles at charging spots, the Twin Cities’ Evie Carshare will allow users to end rides by parking on the street anywhere within a 35-mile designated “home area” that stretches from north Minneapolis to the East Side of St. Paul.

The program will be the Twin Cities’ first one-way car-sharing service since Car2Go pulled its Smart cars in 2016, saying the state’s rental car taxes are too high.

“The service territory for the new program isn’t going to be the entire city, but a much broader part of the city with a real focus on serving more of our lower-income communities and communities of color,” said Russ Stark, St. Paul’s chief resilience officer.

An HOURCAR team will monitor and move vehicles to make sure they are charged and evenly dispersed in the cities. Stark said drivers will be able to earn HOURCAR credits if they return cars to charging stations.

To sign up for the service through HOURCAR, drivers must be at least 18 and have had a valid driver’s license for at least a year. They can’t have any major traffic violations for the last three years or drug- or alcohol-related violations for the last seven years. It can take one or two business days for an HOURCAR applications to receive approval, CEO Paul Schroeder said.

Read the full article at StarTribune.com.