How a St. Paul real estate planner took his ailing startup into overdrive during the pandemic 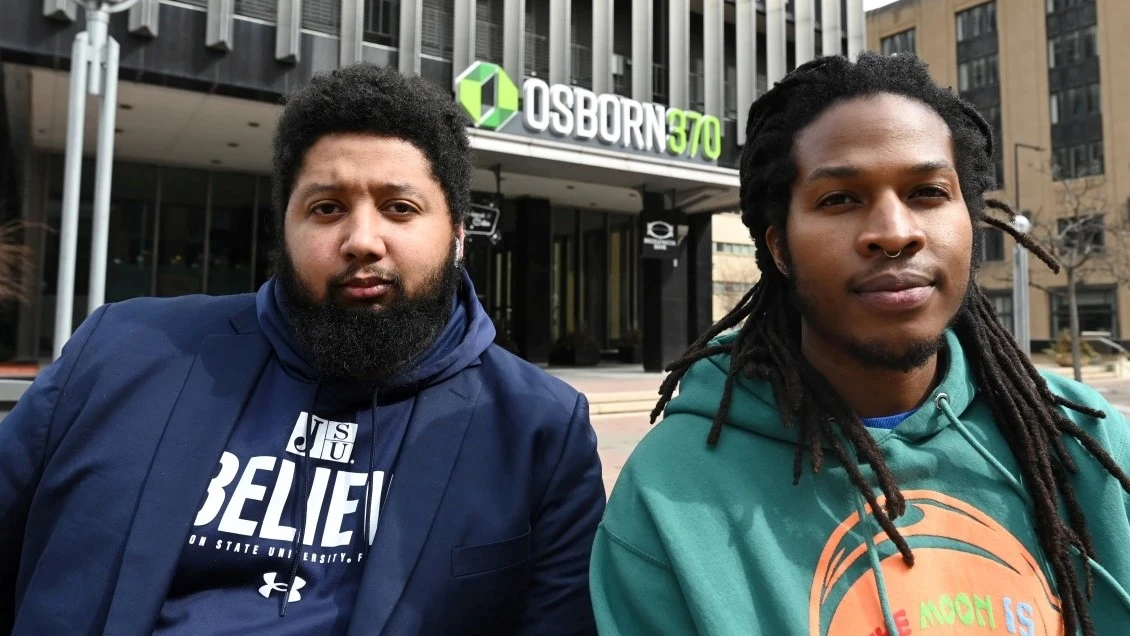 After two years of working out of coffeeshops, in early 2020 prospects were looking up for D’Angelos Svenkeson and his startup commercial real estate and planning firm, NEOO Partners, just before they got terrible.

Composed at the time of St. Paul-born Svenkeson and co-founder Denetrick Powers of North Minneapolis, NEOO Partners had just landed a key contract with Ramsey County and the Center for Economic Inclusion to coordinate community outreach around the county’s long-term planning.

Then the pandemic hit, and that contract was the only active project they had left on their roster. With commercial prospects on pause, they were whittled down to a single client.

“I said, ‘This is the hardest year we’ve ever had,’ ” said Svenkeson, who runs one of the few Black-owned planning and real estate firms in the Midwest. “We survived losing 90 percent of our revenue in 2020. As a man of faith, I say it’s only through God that we’re able to do what we’re doing now.”

‘TO RENEW THE MIND’

And relative to the dog days of 2020, NEOO Partners is doing a lot more than either man — both of them former real estate managers with Thor Construction — could have anticipated.

The economic-development projects keeping their team busy stretch from the Victoria Theater and Metro Transit “Purple Line” in St. Paul to reconstruction efforts at George Floyd Square and along Lake Street in Minneapolis. Farther afield, there’s riverfront plans in Rochester, Minn., a housing-and-commerce project in Brooklyn Center and on down to the state of Mississippi, where Svenkeson went to graduate school.

NEOO is short for “Ananeoo,” which comes from Ephesians in the Greek New Testament and means “to renew the mind.” With a new bumper crop of clients, it’s as fitting a title as any for the period of transformative change that their small firm is going through and trying to activate for others, some of whom are in their own desperate straits. These days, they’ve hardly had to market themselves. Most of their clients have been inbound.

Svenkeson recently ditched his coat and tie, donned comfy athletic wear, let his once close-cropped hair grow and relocated from one floor to another within the Osborn 370 building on Wabasha Street in downtown St. Paul.

NEOO Partners, which employed just the two founders little more than a year ago, needed to make room for their eighth and ninth employees: Menaka Mohan, a former principal planner for the city of St. Paul, and real estate agent Dionne Gharamu-Nrumaachi, a former housing project manager for the city.

There’s nothing exotic or unfamiliar about small clients going through hard times for Svenkeson, whose grandfather moved to St. Paul from the deep south to drive buses for Metro Transit. The same holds true for Powers, who got his professional start as a community organizer curating arts festivals with his uncle in North Minneapolis.

In fact, understanding how to talk to people in need has become a kind of calling card for their startup.

Among their recent undertakings, NEOO Partners will lead community engagement and a real estate development analysis of the areas surrounding 17 of the 22 future transit stations that will line the Purple Line, a bus rapid transit corridor that could stretch from downtown St. Paul to White Bear Lake. That analysis, conducted on behalf of Ramsey County, will look at everything from potential housing to commerce.

“We’re a piece of a very large team, but that’s a significant project,” said Svenkeson, noting they partnered with engineering consultants Toole Design and three other companies to respond to the county’s competitive request for proposals.

They’re also working with the city of Minneapolis on infrastructure planning around East 38th Street and Chicago Avenue, commonly known as George Floyd Square after the man who was murdered by a Minneapolis police officer in May 2020.

Through a contract with the Lake Street Council, NEOO Partners has helped some 27 businesses along Lake Street heavily impacted by riots and arson to source vendors and line up financing for rebuilding efforts.

“A lot of them are not capitalized to rebuild what they had,” Svenkeson noted. “A lot of the property was depreciated, where construction costs would outpace replacement value. It was about helping them to right-size (their plans) and understanding what funding sources are available. … We haven’t seen a landslide of capital investment.”

Among the limited funding sources that have emerged, they’ve been able to steer business owners to Sunrise Banks and New Markets Tax Credits, a type of federally-authorized investment tool for low-income neighborhoods. The city of Minneapolis has been able to help at least a handful of property owners through its commercial property development fund, which offers 40-year forgivable loans to owners who agree to remain on-site for the long term.

“It’s a really, really catalytic tool to incentivize local ownership of a project,” Svenkeson said. “That covers 20 to 30 percent of a project cost. It’s a tool we can’t wait for St. Paul to adopt. We’re hoping St. Paul is able to do something like that because University Avenue still has a lot of displaced property owners.”

In St. Paul, “it’s also about the people looking to come into the avenue,” he added. “Rice Street to Dale Street, there’s a whole corridor that’s looking a little sleepy right now, that could be activated with (new) community-based businesses and community-based owners.”

Four property owners along Lake Street have hired NEOO Partners to continue on as their real estate consultant, including the owners of the Odd Fellows building, which was once home to the El Nuevo Rodeo nightclub.

“In July of 2021, everything started clicking,” Svenkeson said, motioning over to Powers, who arranged enough contracts last year to keep nine workers fully occupied for more than 18 months. “From July to December, he booked out all of 2022 and into 2023.”

If business is looking up compared with 2020, what changed?

Among municipal clients, there’s a growing realization that traditional community engagement around public transit and economic development hasn’t always delivered buy-in from residents and small-business owners, especially in communities of color that may not be closely keyed in to City Hall.

“Business development for us has been 99 percent in-bound,” Svenkeson said. “People have reached out to us as we’ve achieved success with clients.”

NEOO’s approach, Svenkeson said, is to include non-financial assets when they analyze how a business fits into a business corridor’s bigger picture. For instance, bulldozing a beloved ethnic diner to make room for a transit corridor probably isn’t going to win over local residents, boost small business or help promote the project to the general public, unless that diner can be somehow be folded into a new mixed-use business within the project.

Powers said relationship-building is a big part of outreach in neighborhoods accustomed to feeling their priorities have been glossed over.

‘TOOK A LEAP TOGETHER’

Tawanna Black, founder of the Center for Economic Inclusion, recalled relying on NEOO during the pandemic to organize community engagement around Ramsey County’s 10-year economic competitiveness and inclusion plan. When the pandemic hit, Svenkeson and Powers scrapped their “street team” approach and had to pivot to an online format they assembled.

“It was about two entrepreneurs who were going into a project, and really valued each other’s expertise, and took a leap together,” Black said.

The Center for Economic Inclusion plans to connect Black and Latina entrepreneurs enrolled in its upcoming business accelerator to NEOO Partners for guidance in analyzing real estate prospects for potential brick-and-mortar storefronts. Svenkeson said far too often, small new companies get locked into lengthy predatory leases that burn through their starting capital just when they need it most.

The center also plans to work with the planners on a nascent effort to help Black business owners buy the storefront properties they rent.

Svenkeson, who grew up in St. Paul and played football for Central High School, prides himself on being the numbers guy within the firm, with a focus on real estate finance. He spent nearly three years as a vice president of development with Thor Construction after getting his master’s degree in urban and regional planning from Jackson State University in Mississippi.

Powers, a former development manager with Thor, co-founded an e-commerce bow tie company, served as a transit organizer for the Harrison Neighborhood Association and earned a master’s degree in urban and regional planning from the University of Minnesota’s Humphrey School of Public Affairs.